The speed of a Dream

In the misty, inhospitable mountains of Chiapas Mexico, the Zapatista rebel army continues to defend its territory from attack. But the government imposed media silence means that no news of their activities, or evidence of their existence reaches the outside world: a strategic cultivation of amnesia. Knowing that if they are forgotten, they will be massacred, the Ejercito Zapatista de Liberacion Nacional (EZLN) or Zapatista National Liberation Army has organized activities to invite researchers, students, artists and activists from around the world to apply for one of their escuelitas (schools of life). Being accepted means an invitation to come and live briefly in the communities but (unlike much ethnographic work) here the community itself sets the agenda and terms, date of entry and departure and all the activities in between.

This photographic reflection was realized in 2014 and begins in the colonial city of San Cristóbal de Las Casas, which the Zapatistas briefly controlled in early 1994 at the beginning of their uprising. Like a sugary candy on a wedding cake the cathedral imposes its presence on the terra-cotta city, but the shadow of the mountains darken the horizon: a reminder of the troubles brewing there. The Zapatistas gather the visitors and divide them into five groups for the second stage of the journey: A bumpy one, standing in tight groups in the back of covered pick-up trucks, to the five caracoles, or autonomous municipal jurisdictions.

I arrive in the Chiapas Highlands at Oventic, the organizational centre of the Tzotzil community. The main building and seat of the Junta de Buen Gobierno, as well as the surrounding buildings are covered in bright murals with dream-like iconography evoking pre-Colombian times entwined with syncretic Catholic and unique Zapatista images. Here in the heart of Zapatista territory, I am assigned a guardian who does not leave my side for the entirety of the time spent living there. With my guardian and a pair of rubber boots (for the omnipresent mud) I travel the next stage into the mountains to learn and work as part of a Tzotzil family in a remote community. Here the masks disappear, but photographing people is strictly forbidden: The mountains also hold many communities that do not align themselves with the Zapatistas and the danger of treachery or of sudden military action is ever-present.

In a community where labour is strictly divided by sex-roles I rise in the dark, damp cold of the early mornings to help grind corn for the day’s tortillas, toasted on a massive metal oval over the fire. Men get the wood, but women help carry the daily water collected from still, roadside ponds to boil for consumption or heat for a bucket bath. If the rain stops we quickly lay out plastic sheets to dry coffee beans in order to grind them, each day begins with the freshest coffee boiled on the same central fire. Coffee cooperatives run by the Zapatistas help sustain the caracoles, which otherwise are somewhat removed from the economic circuits of the outside world, except for the presence of Coca-Cola and the cell phone that my guardian is perpetually texting on. I am the only female whose feet are covered: the only one with boots, all others squish through the cold mud in plastic porous slippers. I am also the only one, with my new blood, that is tortured at night by the bed lice, much to my hosts’ amusement.

In the communities, signs of belonging to the Zapatistas are invisible; here there are no murals, no weapons or ski masks visible, only the mask of the imperturbable surface of the watchful Tzotzil faces. Faces watching and waiting, as they have for hundreds of years, for the return of their land, way of life, and the dream of freedom. The United States also has a dream, noted former Subcomandante Marcos, the dream of constructing the “disneylandia neoliberal” in the world. Reflectively, Marcos (2004) writes,

But what is the speed of a dream?
I don’t know
In our dream, the world is another…
Our struggle, that is to say, our dream, doesn’t end…
The reason that moves us is ethical. In it, the end is in the means.

Quetzalcoatl’s Mayan winds blow, and Mother Earth’s heart beats in time with a dream that is outside of chronologically measured and equally subdivided shards of time. The space between things is sacred, “… the dream happens whenever our consciousness hugs the boundary of the crossing” (Florensky, 1996 p. 44). I knew all the while that this was but one more phase in a journey that seemed to have no clear destination. However, it had a process, which was guided by an ethic and a primordial truth that was embodied and transmitted through the visual arts. This is the social and spiritual function of the murals at the gathering places.

As I was returned to Oventic, for the closing ceremony and farewell, I again experienced the vibrant murals, and resonated with their frequency calibrated to the strategic location and the significance of activities that took place there. If art is “materialized dream, separated from the ordinary consciousness of waking life” (Florensky, 1996 p. 44) and we accept that “the reality of art is the reality of the imagination” (Winterson, 1995. p. 40), then we can perceive the iconographic system of the murals as an interface whose surface tension reflects and changes with the knowledge, desires and dream of the Zapatistas. Semiotically feeding and being fed by the community, the murals figure forth the unconscious of thought. Each mural is made, covered and remade, in consensus, and together with artists who come to be directed by the community, they carry a “fantastic weight” (P. DuBois, 1995, p. 170) that means they alter along with the changing consciousness of the Zapastias.

The constraints and affordances of the context impacted my visual process. Consequently, my series of photographs work in pairs, each photograph of daily life haunted and in tension with the shimmering of the murals. The series presents thought in the process of tangling with cosmology, being, and imagination, and questions of how value serves to bring universes into being (Graeber 2013). 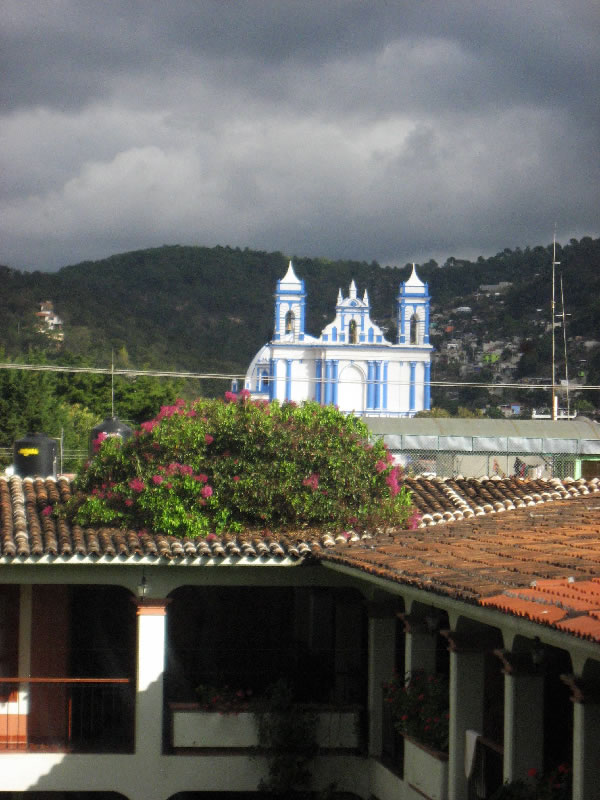 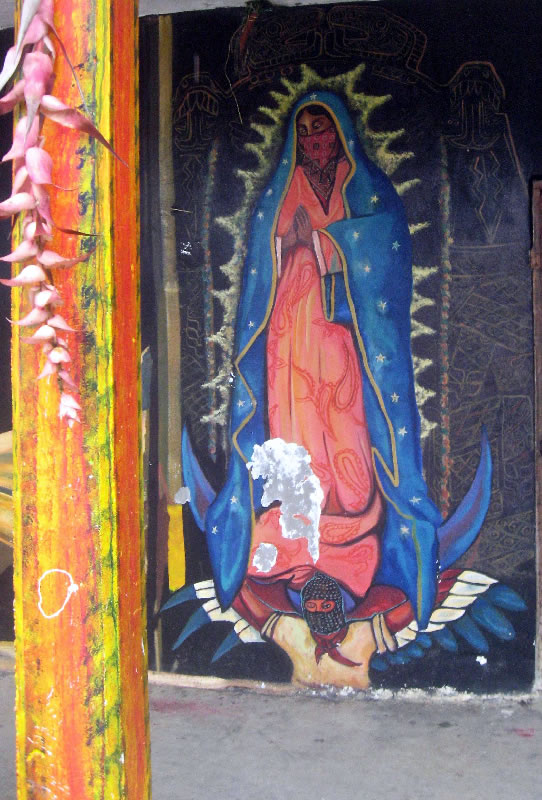 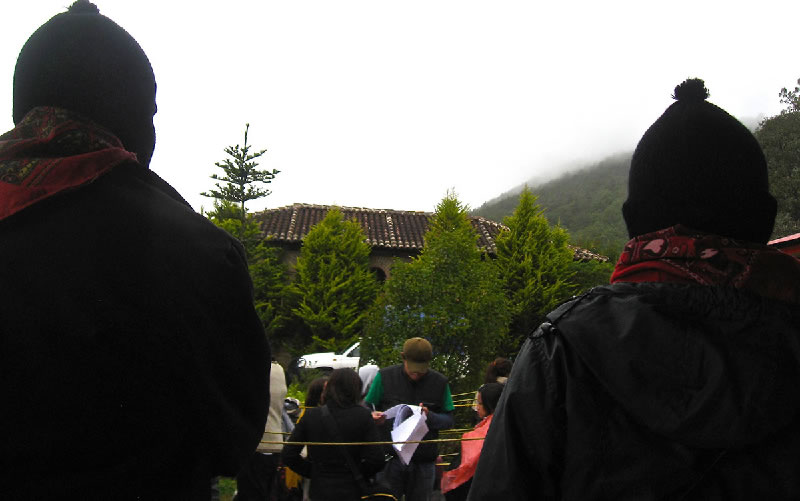 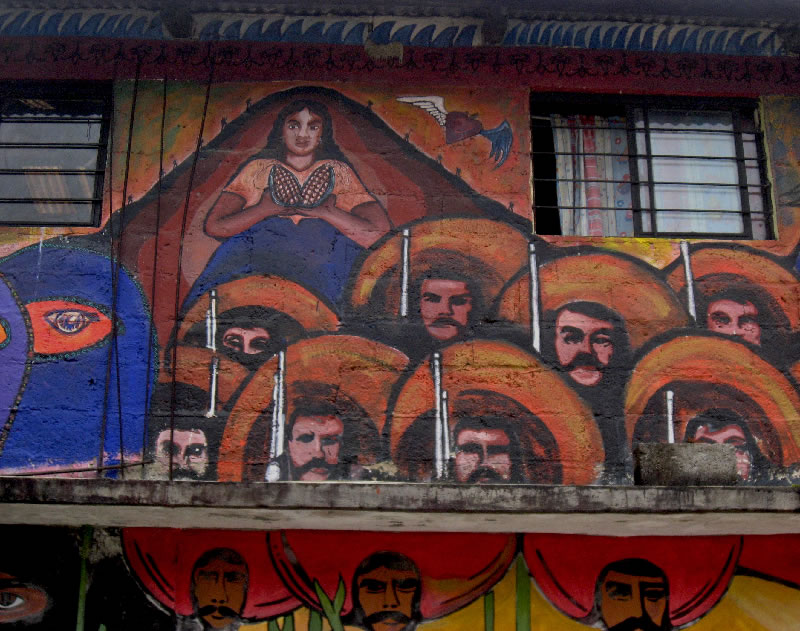 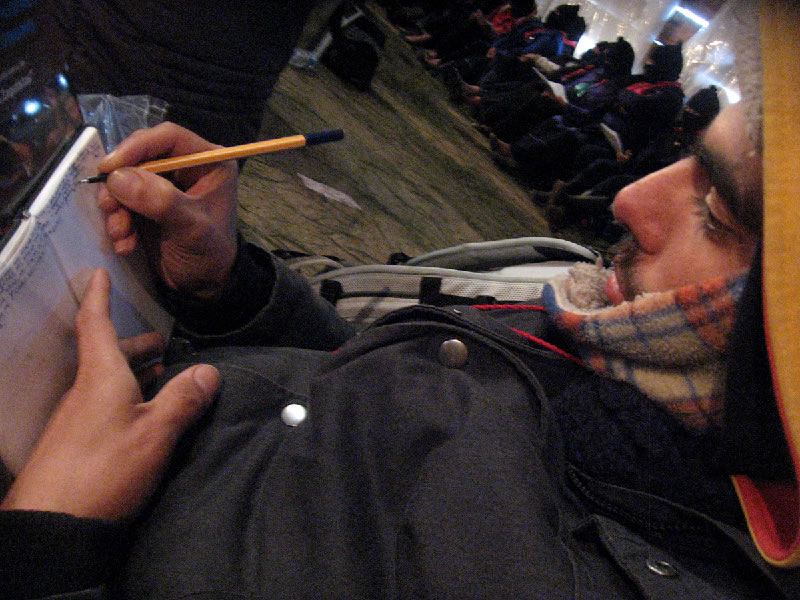 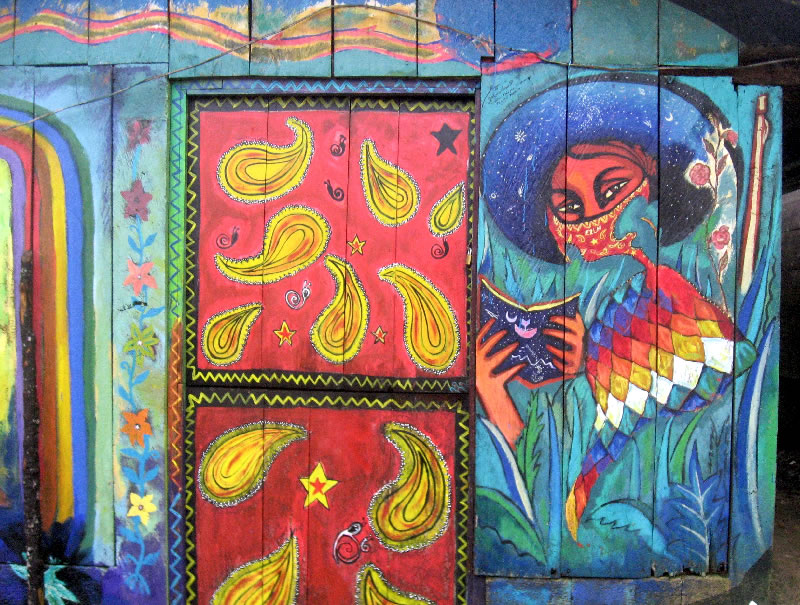 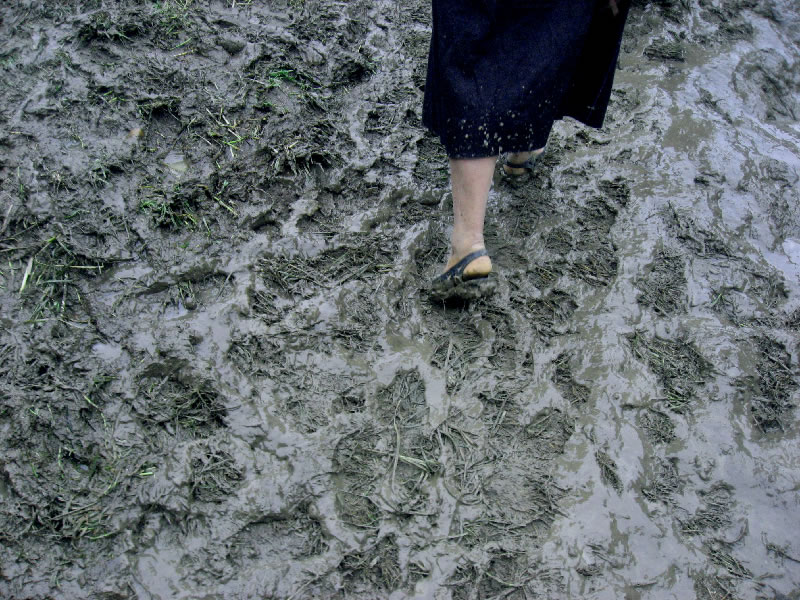 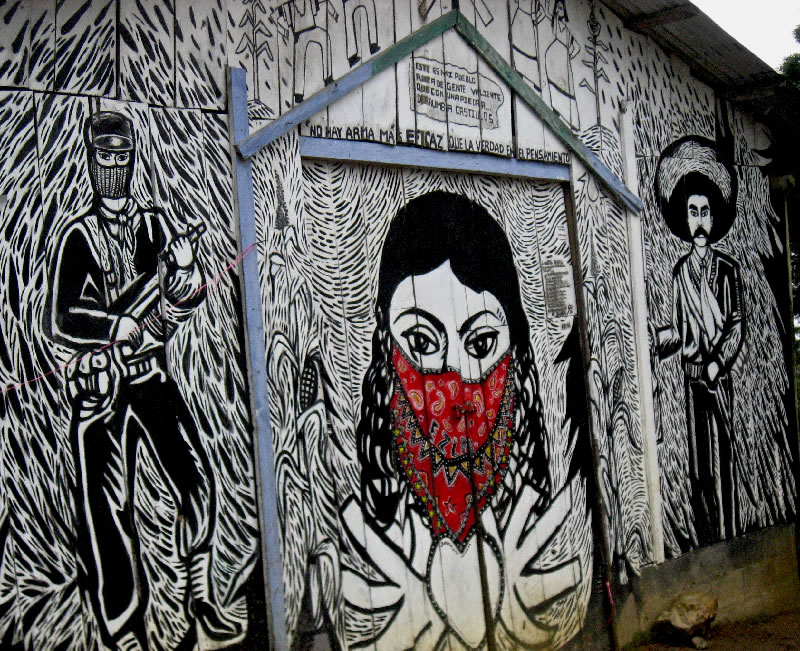 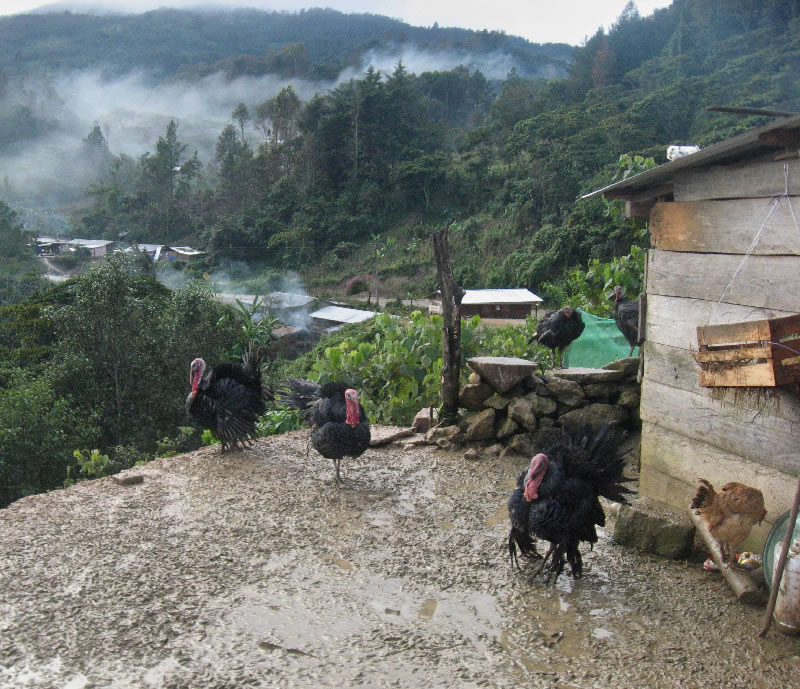 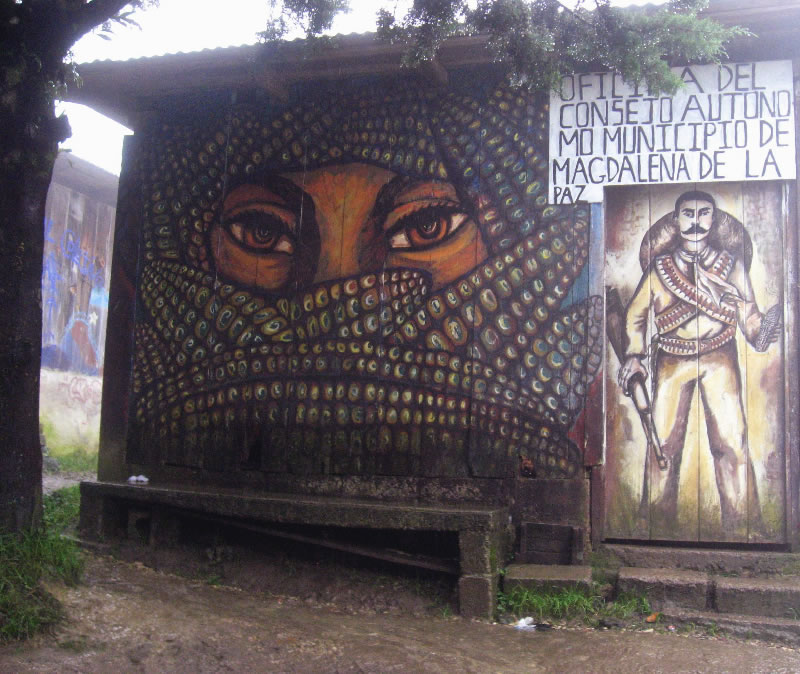 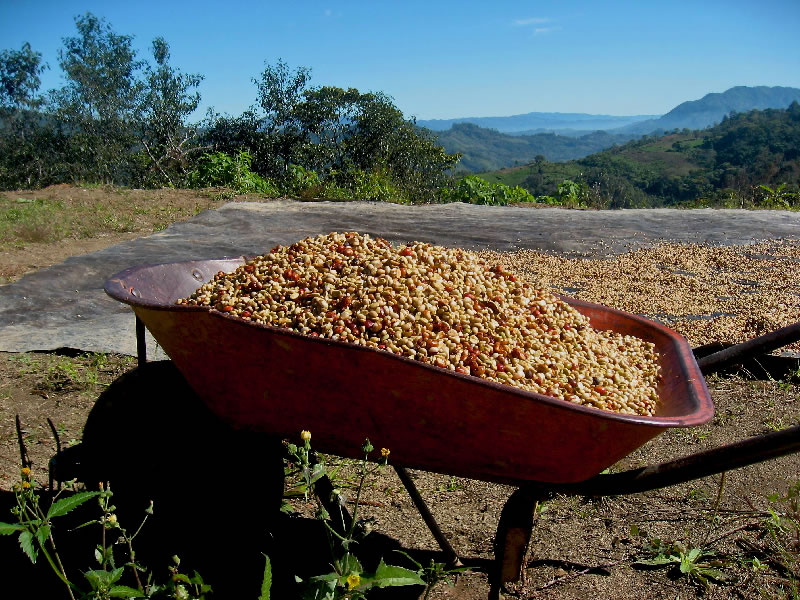 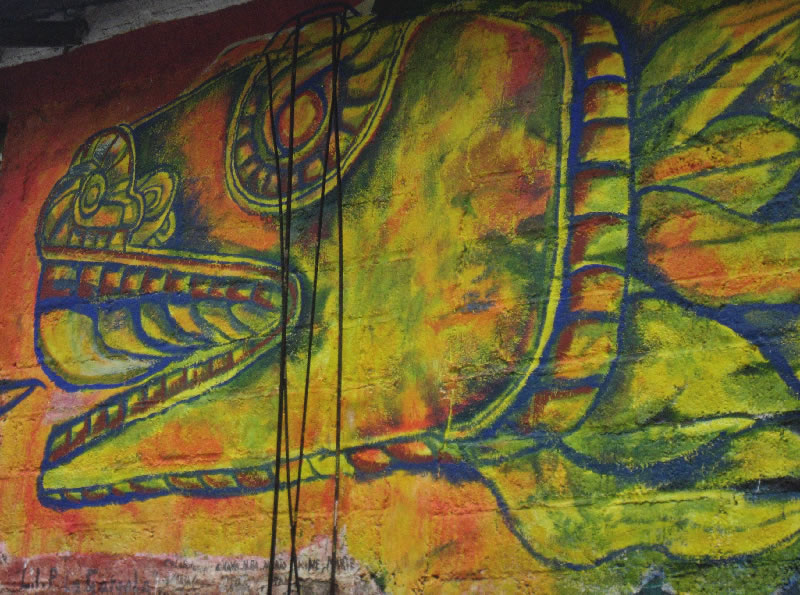 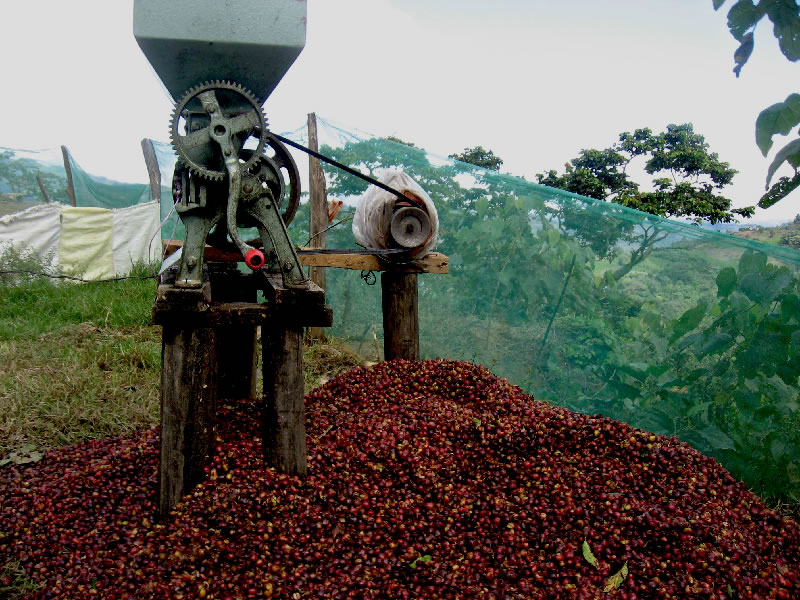 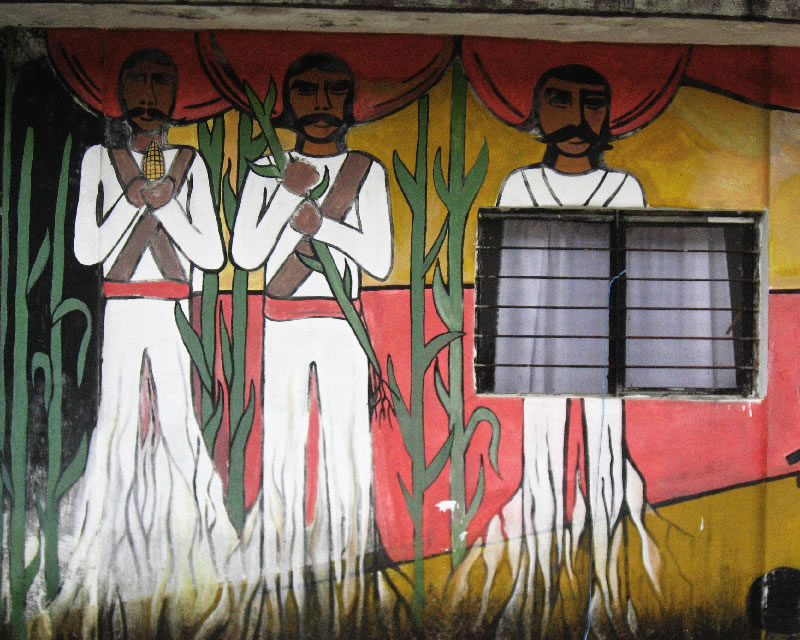 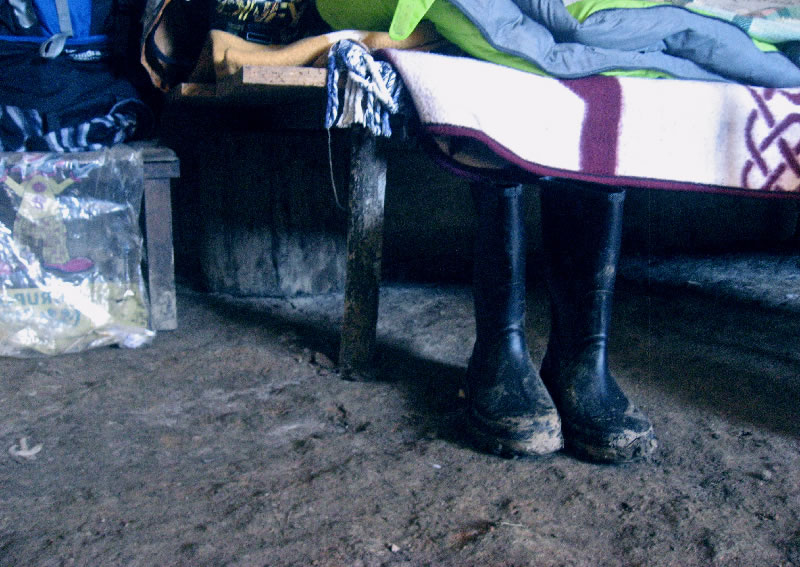 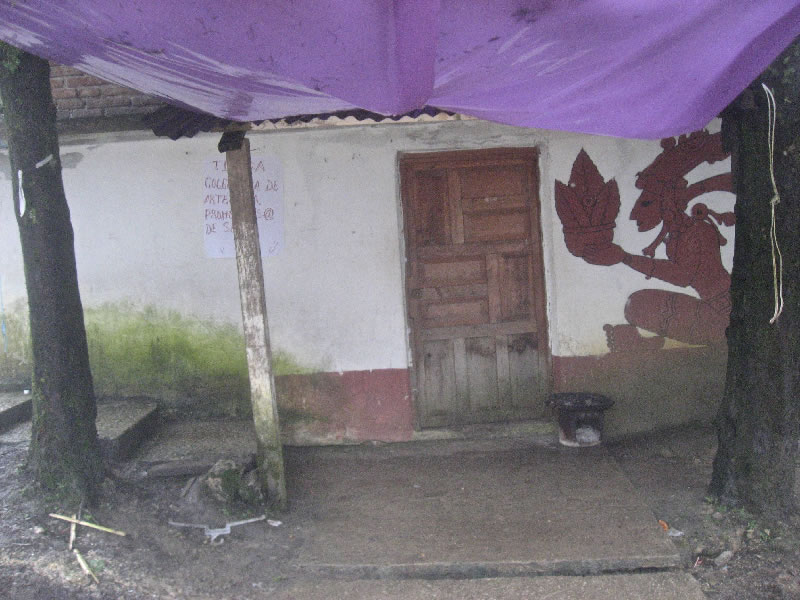 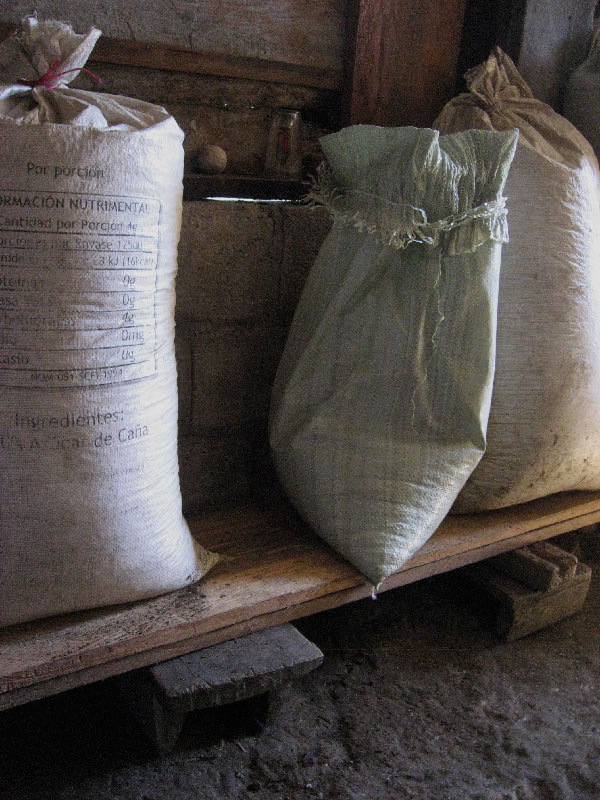 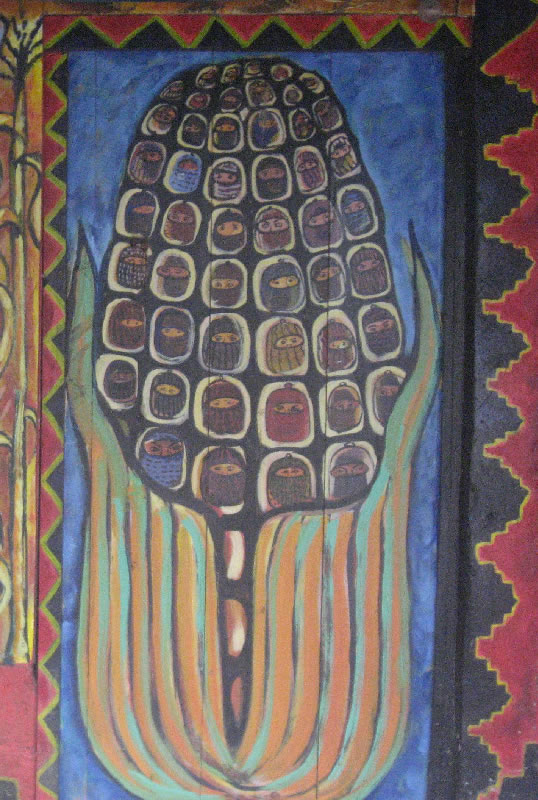 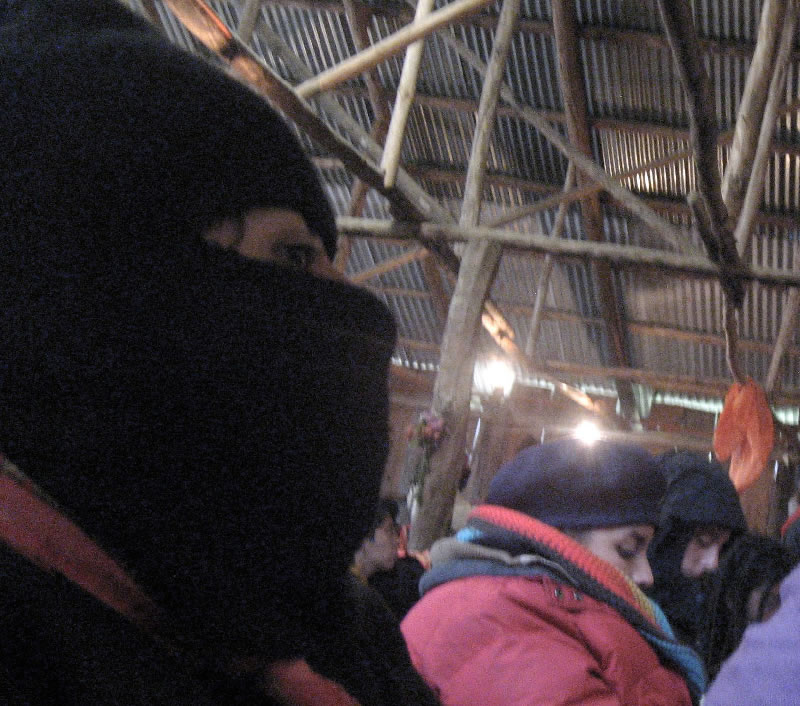 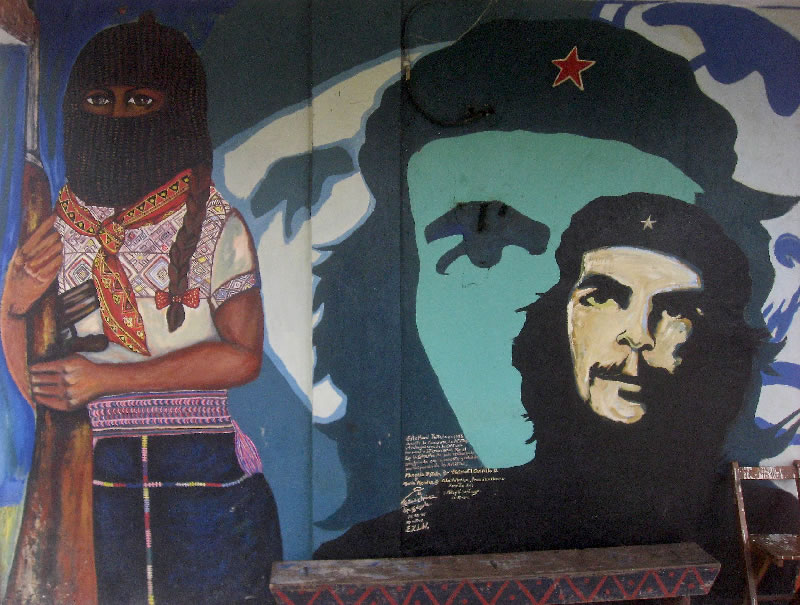 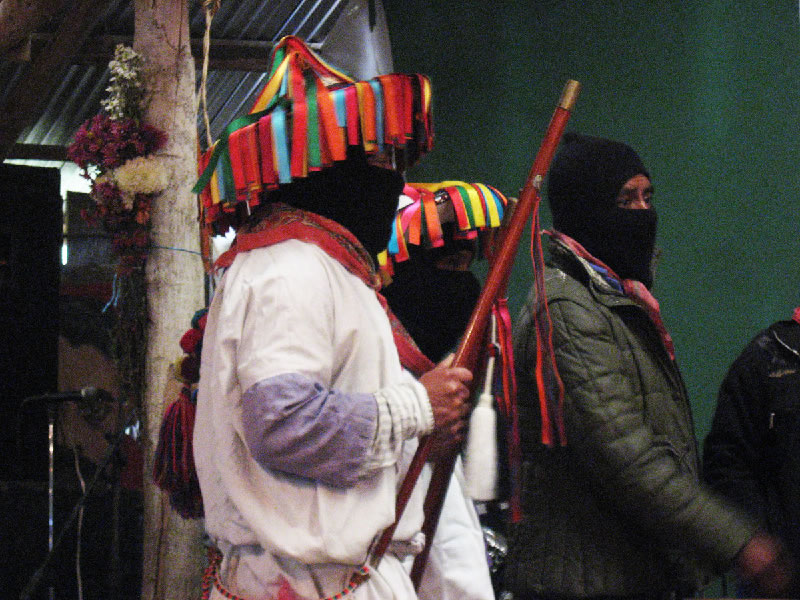 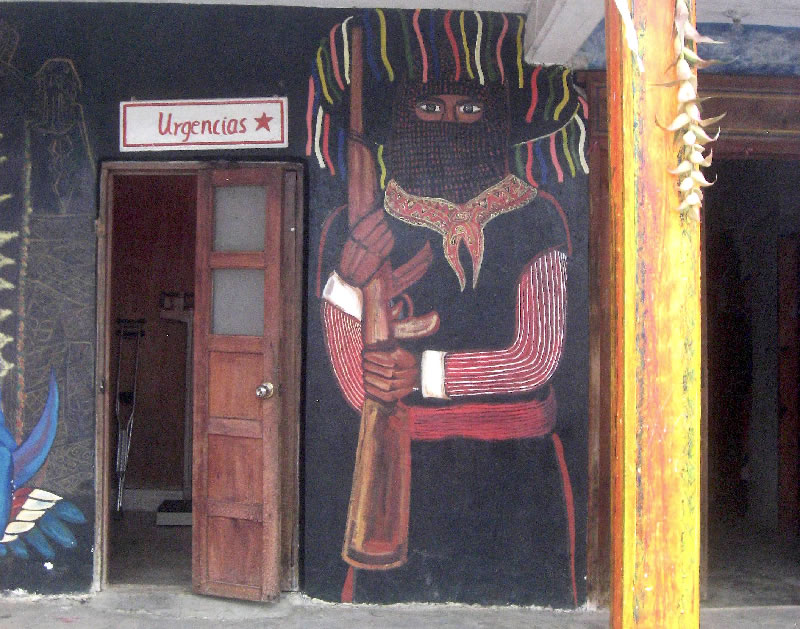 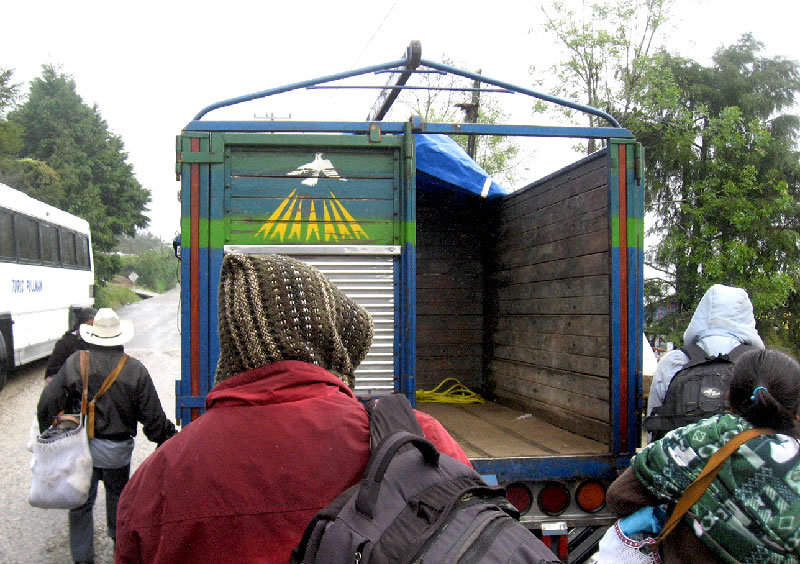 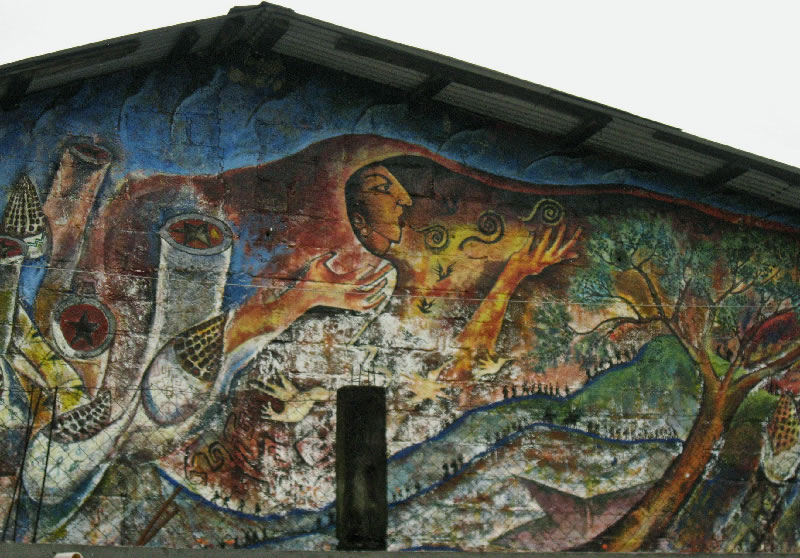