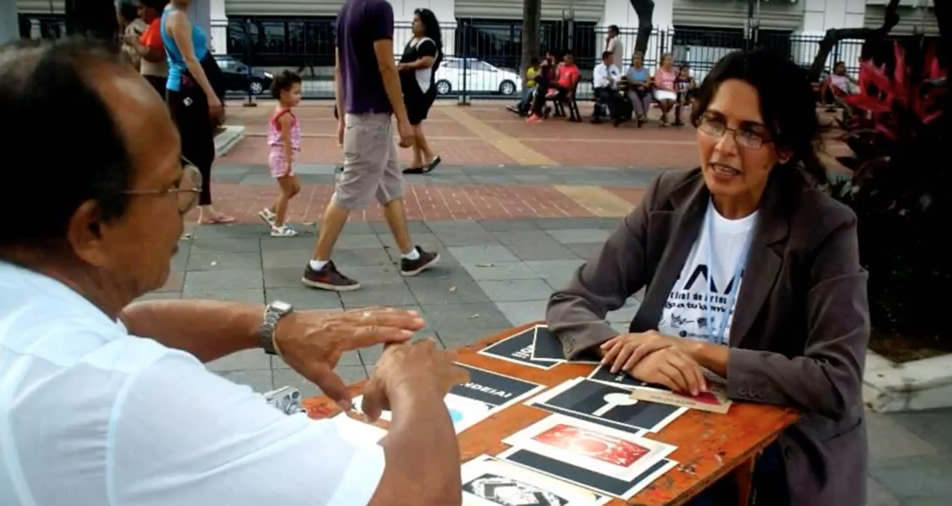 Work by Joyce Sanchez, shared on December 16, 2013. Posted in Showcase

Symbology of Interculturalism is a performance that takes place in the city of Guayaquil in an attempt to construct knowledge together with its people.

The performance is supported by Intercultural Cardboard Press, Community Art Practices Lab with the intention to conduct interdisciplinary research upon interculturalism as a research topic.

The research strives to answer questions: How people in Guayaquil learn about interculturality? Is it possible to assimilate through images related concepts to interculturalism?

The research answers these questions in the text Ethnology of an Urban Pedagogy of Interdisciplinary Art. Promoting a Social Didactic in the city.

The research tries to make visible the connections between art and social pedagogy.

In order to achieve our research goals we have engaged our work to ethnography and visual methodologies. And definitely taking art to an interdisciplinary field engaging its practices to social processes, cultural and artistic management.

Ethnology of an Urban Pedagogy of Interdisciplinary Art. Promoting a Social Didactic in the city.

This interdisciplinary research aims to verify the concept of social didactics coined in this research and defining it as “the strategies or methods that individuals or corporations that teach, train, develop new skills and knowledge in civil society “.

Symbology of Interculturalism is part of the set of performances named “Citizen Poetics” an art project that aims to establish a dialogue between social pedagogy and art in an attempt to egenerate knowledge with and through the community, responding to concerns raised around what the artist calls social didactics using ethnographic methods. The purpose of my work is to provide discussion in the territory of construction between ethnography, anthropology, contemporary art and pedagogy related to citizen participation and citizenship learning studying the artist as a mediating agent in such practices. In the poetic reason appears the hermeneutic consciousness. Symbolgy of Interculturalism is considered by the artist as a social exercise and a case study.